Let's take a break from coding and read a book. Actually, I listen to this book. I got it as an audiobook from the overdrive app. With so many things to learn, I had been exploring ways that I can learn more effectively.  Even though I was a teacher, I feel the learning strategies that I gave to students stem mainly from my own learning experience.  How I begin to wonder if there are the most effective though it appears as a tried and tested method.  It involves mainly re-reading, reviewing and making your own notes. As with all learning methods, I do understand that all skills will be effective at different degrees. I am sure you have friends who do not make notes at all and still scored Aces for their final university papers.  And this is where I had been self-defeating, I told myself that they are genius while I could only get by with sheer hard work. Looking back, I was at my best during my secondary school years when I had to teach my friends the concepts and when there are a lot more time compared to the amount of content to be covered for O levels. When time is not enough in comparison with the amount of content to be covered in JC and Uni days, I really struggled. 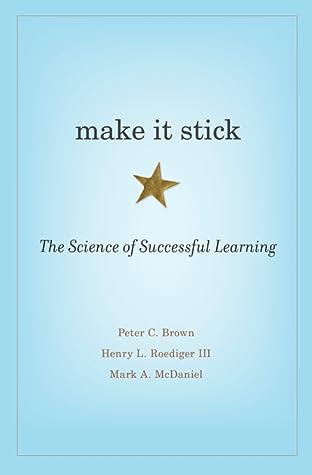 Our misconception about learning:

"We are poor judges of when we are learning well and when we’re not."

Rereading text and drilling at only one particular skill or concept feels more fruitful and this feeling felt even more right when the grades do appear to improve after an immediate cramming session.  These created the illusion that we are learning, making use favour these strategies.  However, the improvement in grades is only temporary which means that we have to spend the same amount of time learning these topics again when preparing for the next test.

"Many people believe that their intellectual ability is hard-wired from birth, and that failure to meet a learning challenge is an indictment of their native ability. But every time you learn something new, you change the brain— the residue of your experiences is stored."

Our brains are constantly rewiring and making connections. It is not about the number of neurons we have but how we use it. It is like a muscle. The more effort put into working on it, the stronger and more lasting the memory of the exercise.

What could be done instead of rereading and drilling:

#1. Retrieval practice— recalling facts or concepts or events from memory

#2. Space out the retrieval practice.  By giving it some time, our brains begin to forget and this makes the retrieving harder and feels less productive, but the effort produces longer-lasting learning.

Ways to perform retrieval practice involved:
- Flashcards, simplest form of recalling
- Self-quizzing tells us what we know or don't know, allowing us to focus on what to study.
- Attempting to problem solve before being taught the solution. It makes you compare your method with the one taught which leads to better learning.
- Elaboration.  Expressing the content in your own words helps you consolidate and make new connections with your existing (prior) knowledge.
- Reflection.  This involves several cognitive activities: retrieving knowledge and earlier training from memory, connecting these to new experiences, visualizing and mentally rehearsing what you might do differently next time.  Similar to elaboration, this consolidates the knowledge further.

Reflection on what I had done before as a teacher:

We gave one-pager tests everyweek as a cohort level strategy.  This was suggested by another teacher however, I was not a believer since it seems counter-productive. I kept re-marking the same worksheets. I felt I was wasting my time. My students do not enjoy these tests since they felt they have not done their rereading and this is wasting their time. We spend quite a lot of lesson time just doing the test, retest and re-retest. After multiple attempts of re-re-re-retest, I will let them do it at their own time or even allow them to do the test open-book hoping that it shows them what content they still do not know.

My fellow colleague had explained his rationale before, that we need to force the kids to revise their work.  We enforce it by giving the test during lesson time, forcing them to recall while answering the questions. I always attribute my failure with this strategy to our different personalities, that I was not a firm teacher.

After finishing the book, I was more convinced about the strategy and I realized I had sabotaged the effects of this strategy.

If I can do it again, I will explain to my students how learning is tough.  I will motivate them that when they are struggling, there are learning.  To believe in themselves that by constantly recalling the facts, they are making the memories more durable.

If I can do it again, I will not give them open-book tests.

"Giving feedbacks strengthens retention more than testing alone does." The book mentioned that that delaying the feedback briefly produces better long-term learning than immediate feedback. Apparently, open-book tests are similar to giving the students immediate feedback so I have to make them struggle more instead of looking for answers.

If I can do it again, I will give weightage to all the one-pager tests and brief students on what to expect for each test.

Nobody likes tests because it makes us struggle and we are uncomfortable with that feeling. Despite using lesson time to give the test, my students know there are no consequences to failing it and having to redo the re-re-re-retest. They struggle less and memorize less. To counter that, I will have to give weightage so that they make an effort and take each attempt more seriously. By briefing them, I also manage their expectation and prepare them for each attempt instead of giving up easily.

Lastly, if I can do it again, I will space out the content to test them to avoid the familiarity trap when we start to feel that we know something and no longer need to practice it. Thus it is important when self-quizzing to read out loud or write out the answers instead of thinking that you know the answer. Many times, we only realise how much we actually know after we write them out.

I hope you will try out the strategies.  I used to listen to my audiobooks while doing other things however I noticed how I was unable to retain the knowledge learnt through this method. These days after I finish I audiobook, I will reflect on the content and write a review. Tadaa~

I am a mother of 2 cheeky, chatty girls. I was a science teacher who taught chemistry for 10 years to Singapore secondary students. In 2021, I decided to take a break from teaching. However mid way through the year, I did a lot of reflections and decided to quit teaching in MOE. This blog is about daily aspect of my life, learning and trying out things to reinvent myself. KWEINT is the written pronunciation for quaint. Definition of quaint: attractively unusual or old-fashioned KWEINTb can be KWEINTblog which seems like an old-fashioned art now with most people on social media.KWEINTb can be KWEINTbits where I would like to be explore attractive old-fashion art like crochet items. As of now these are the two main objective of this blog. ^^ Want to get in touch? I enjoy hearing from readers and new friends. It is quick and easy. Remember it’s good to talk! If you have any suggestion, comments or just want to say hi, please email me on the following address. patwinkle @ gmail.com